Released in 2012 by WMS, a subsidiary of Scientific Gaming, Bier Haus brings the Bavarian Oktoberfest celebration to the reels. A hit in casinos thanks to the massive appeal of German beer culture and an engaging design, this slot game has been translated to the online reels for fans and new players alike.

Minimal bonus features, sparse audio, and basic animations show the game’s age, but Bier Haus is a classic option for those who appreciate the combination of beer and slots.

Bier Haus translates easily to “Beer House” in English, and this slot is all about beer. A classic German beer hall sets the scene for the reels, which are filled with quintessential Bavarian beer and Oktoberfest symbols.

A jolly mustachioed Bavarian fellow – holding a beer, of course – is the highest paying symbol on the reels. Other regular symbols are Bavarian castles, wooden beer kegs, beer steins, accordions, and fall leaves/acorns. Generic card suit symbols round out the assortment as the lowest value symbols on the reels.

Wild symbols serving up frothy mugs of beer make for a wild time, substituting for all symbols except for the green and purple Bavarian barmaid symbols that trigger the free spins bonus.

There are a number of adjacent positions on each reel that are filled up with random symbols (from the paytable) before each spin. This can result in large stacks of matching symbols that can cover entire reels on any spin.

The graphics are relatively vibrant, but they could be crisper, and the basic animations are minimal but typical for games of this vintage. The reels fill the screen nicely, and the paytable is very legible, contributing to a comfortable playing experience.

The audio in the base game is more minimal than expected. The background sounds are very subtle and sound more like the atmosphere in a restaurant than a boisterous beer hall during Oktoberfest.

Free spins are accompanied by jovial Oompah music and singing, though, which helps to create a more festive vibe in that part of the game. Otherwise, the reel sounds are neutral and easier on the ears than more retro games. 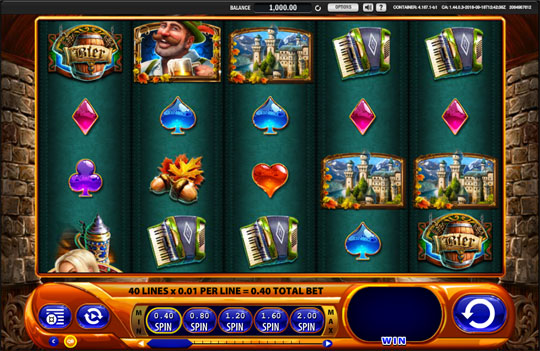 Bier Haus serves up five reels and four rows (5×4) of Oktoberfest fun with a fixed 40 lines on the reels.

In the Classic view, use the arrows to increase or decrease the bet value per line by one-cent increments. As you change the Bet/Line value the Total Bet value automatically updates. The Quick Bet display offers a slider bar that displays the Total Bet value per spin ranging from the Min to Max bets; simply slide the bar to select your total bet value.

The in-game paytable is dynamic, so it reflects the accurate payouts for the bet value that is active on the reels. The Bavarian man symbols are the highest paying symbols on the reels and pay out $5.00 on a minimum bet and $500.00 on a maximum bet for six matching symbols.

The playing card suits are the lowest paying symbols on the reels and pay out $0.05 on a minimum bet and $5.00 on a maximum bet for three matching symbols.

Top paytable values (for five-of-a-kind combinations with a maximum bet):

Autoplay options can be customized for different variables, including the number of spins, the number of minutes played, your account balance, win amounts, and stakes. Auto spins run slowly enough to clearly display all of the win lines and the total win on a spin, which we appreciate. 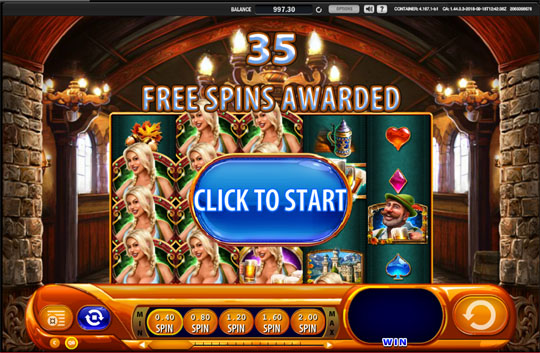 The RTP (Return-To-Player) percentage for Bier Haus is a solid 96.00%, which is average compared to other WMS games.

Unfortunately, there are no jackpot options available in the online version of Bier Haus.

The bonus action in Bier Haus revolves around the Feature game that awards free spins where persistent wilds may be added to the reels.

Wild symbols are decked out with large, frothy mugs of beer, and can substitute for any symbol on the reels except for the two Bavarian barmaid symbols. Wild beer symbols can also become “Persisting Wilds” (sticky wilds) on the free spins reels.

Five or more Feature and/or Gold Feature symbols scattered on the reels trigger the Free Spins Bonus Feature. The symbols must be on adjacent reels, starting on the leftmost reel, to trigger the Feature. The winning combinations and payouts during the free spins feature game are the same as in the base game. 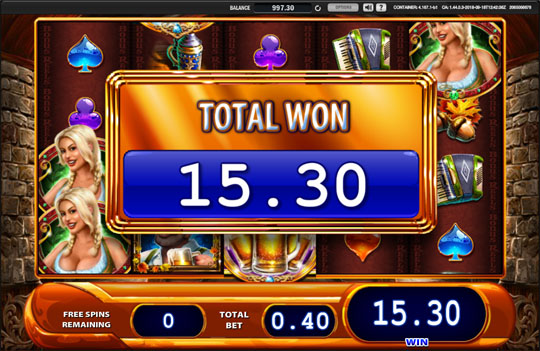 During the free spins, when five or more Feature/Gold Feature symbols land scattered on the reels with the same criteria, more free spins are triggered and added to the total number of remaining free spins.

This game is an easy sell for slots players who are also fans of beer, Oktoberfest, and German culture. Apart from appealing to existing fans of the Bier Haus land-based casino slot, the very broad appeal of the theme mixed with simple gameplay make it a solid choice for beginning to intermediate players.

Heidi’s Bier Haus takes the same popular theme and features from Bier Haus and kicks everything up a notch with the addition of special features and jackpots where Bier Haus had fallen short.

A beer tap feature that fills entire reels with wild beer symbols and a Wheel of Fortune bonus feature that awards four different jackpots, more free spins, and special free spins with extra wilds on the reels. The number of maximum free spins was upped to 100 free spins as well.

Stacked Symbols: Symbols can randomly be stacked on any spin, filling up an entire reel on any and all reels.

Easy To Play: The options and features are simple enough for anyone to play. 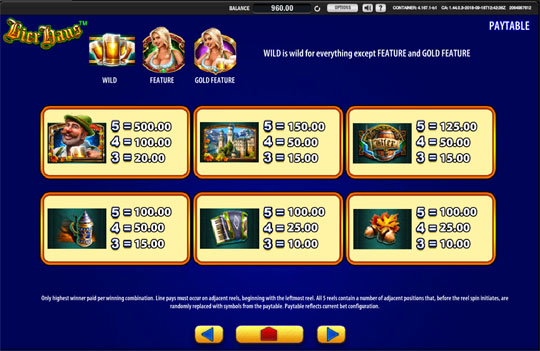 Limited Bonus Features: Very few bonus features are offered outside of the free spins bonus game, and apart from the possibility of Persistent Wilds, the free spins are exactly the same as the base game spins.

No Jackpots: There are no jackpot options in this game, unlike WMS’s Heidi’s Bier Haus slot.

No Multipliers: The lack of multipliers is surprising, as there are so few features in the game.

Audio: The audio seems out of place and lackluster during the base game, especially for such a fun theme.