This truly exciting, fully licensed slot from Bally Technologies is based on Judd Apatow and Will Ferrell’s 2004 hit movie, Anchorman: The Legend of Ron Burgundy. Released in 2018, the Anchorman slot game may have taken 14 years to make, but it was worth the long wait.

Featuring all your favorite characters from the movie, including chauvinistic ‘70s newsreader Ron Burgundy, Brian Fantana, and Steve Carell’s Brick, this 25-payline, five-reel slot is an absolute retro blast.

If you liked the movie or even just remember the ‘70s, you’ll enjoy the style of the Anchorman slot.

With a bass-driven funk soundtrack and animated, movie-themed symbols, the production quality here is absolutely top-tier. The reel’s icons include:

Even Baxter the dog makes an appearance, wagging his ears when he’s pulled as part of a winning line. The only noticeable omission from the film’s cast is Christina Applegate’s Veronica. It’s a loss, but fans of the movie should feel well-served by the rest of the collection.

The bonus rounds even play with clips from the movie, and sharp-eared players might recognize the official songs from the film. All that extra content makes playing this game visually and auditorily stimulating and a real treat for anyone– let alone big fans of the license.

We also have to give props to the deliciously warm bassline for the music during the ‘sex panther’ bonus round– a fantastic slice of parody ‘70s erotica that certainly made us laugh. 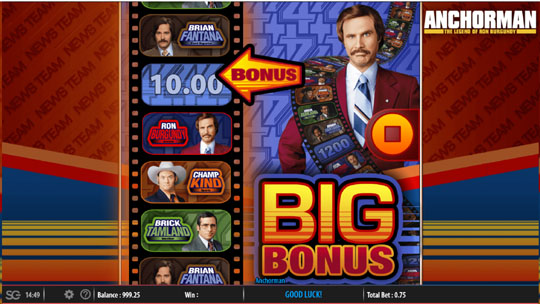 There are 25 paylines in the standard game of the Anchorman slot. You can’t actually see them overlaid above the reels, though; instead, you need to look in the information section of the game to see which lines make winners.

Twenty-five lines is fewer than quite a lot of slots from Bally, which helps makes things a bit simpler.

The minimum bet is $0.75 per spin. The maximum bet goes up to $150, which is relatively low compared to many of Bally’s slots and may not be enough for high rollers.

There’s no auto spin functionality on the Anchorman slot and no way to customize paylines, either. You have to spin the reels manually at a set overall price each time, as the game doesn’t offer any bet-per-line equivalent.

Lastly, Anchorman comes with a 96.3% return-to-player (RTP), which is on the higher end of Bally’s slots and is a big plus for this game.

This slot has three jackpots. You can find them on the bonus wheel, which you trigger by pulling three bonus symbols on the main reels. This gives you one spin of the wheel, with ten possible results. Three of these are smaller cash prizes, four are extra bonus games (detailed below), and the final three are the tiered jackpots. These are: 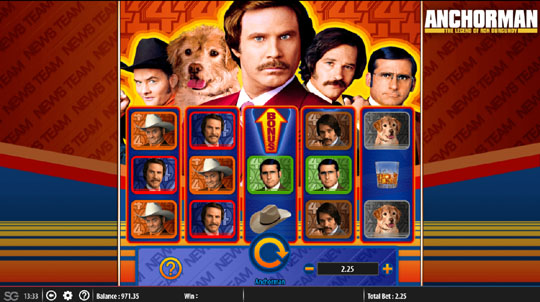 There are a lot of bonus rounds and extra features in the Anchorman slot game. With no fewer than five separate bonus rounds, you will still be seeing new content from this game after many hours of play.

There’s only one wild symbol in the main Anchorman game, which is helpfully labeled, “This is a Wild Symbol.” It counts as your basic wild in that it can substitute for any other symbol to make a winning line.

On a round where no other bonus features are activated, a Baxter wild spin has a chance to occur. When these happen, Baxter barks at the screen and three to ten extra wild symbols are scattered onto the reels.

The only two scatters in the main game are the wilds and the bonus symbol. Pull three bonus symbols in one spin to unlock one of four different bonus rounds, or possibly a jackpot prize.

In one of the bonus rounds, Champ’s Whammy Free Games, there is an extra ‘whammy’ scatter symbol.

The Anchorman slot game has the following bonus round choices, each themed after a central character from the movie: 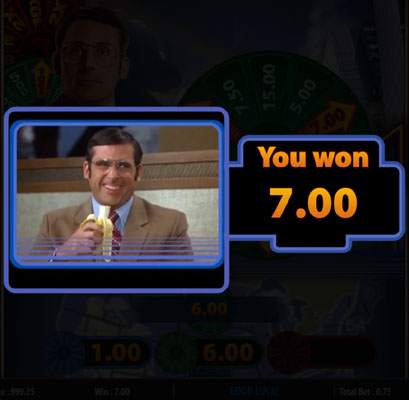 Ron Burgundy’s Giant Free Games are based on their own set of an expanded 19 reels and a ridiculous 117 paylines. It also has its own set of nine symbols and an alternate paytable. When you match five of the top symbols, an elongated picture of Ron crosses several columns and will net you $400 at maximum bet.

Pick this bonus from the wheel and you’ll get six free spins on Ron’s reels, on top of 1x your original bet.

Champ’s Whammy Free Games offers you 12 free spins on the usual reels, except with a few added symbols. At the beginning of your round, a ladder appears on the screen. Pull a special whammy symbol on any of the reels to advance up one rung of the ladder.

Each level gives you a higher prize, starting at $50 and going up to $2000 at maximum bet. This means you get all the prizes from the 12 free spins as well as the bonus.

Brick’s Weather Wheels offers you one spin of Brick’s blue wheel. You can pull further spins to unlock a green and a red wheel. Each spin offers prizes that scale up with your bet.

The blue wheel awards a prize between $150 and $2000 at max bet and gives you the chance of a level-up. If that is pulled, you get a second spin on the green wheel. This wheel offers a top-level prize of between $400 and $4000 and the chance of another level-up.

The red wheel gives 2x your running bonus total and then multiplies that by ten. This gives you a maximum potential prize of $120,000.

The spins can end on the blue wheel if you’re unlucky.

Brian Fantana’s Sex Pick is possibly NSFW (not safe for work). While it doesn’t actually contain any explicit material, the whole theme is quite lewd, and contraceptives jokes and euphemisms abound.

It’s relatively simple to play, though. Just choose three from a selection of 15 cologne bottles to reveal a prize under each one. They range from a low of $0.20 at the lowest bet, to between $40 and $200 at the maximum bet levels.

Then, you are asked to pick from a range of what are referred to in the game’s manual as ‘packets.’ However, they are quite obviously condoms, which come with joke names such as ‘The Hooded Guest.’ Each packet reveals a multiplier, between 2x and 10x. Pick one and the total from the rest of your bonus round will be multiplied by that. 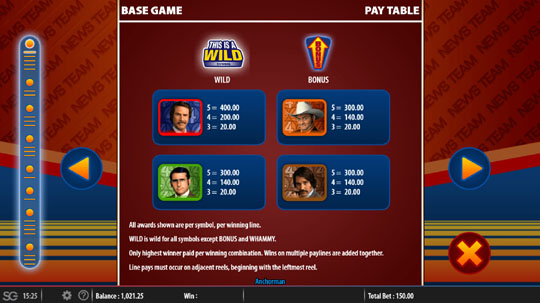 Slot-playing fans of the Anchorman film will absolutely love this title. Anyone who likes Will Ferrell, Steve Carell, or any of the rest of the cast will also be happy here.

On the other hand, Anchorman is also objectively a very good slot game. Anyone who enjoys jackpots, unique mechanics, and genuinely funny jokes should find something of interest in Bally’s production.

The only drawbacks are the relatively low maximum bet and the lack of auto spins, which might put off the most hardcore of players.

Big-name movie tie-ins are not rare to see when you browse online slots today. Titanic, Top Gun, and Wacky Races are just a few pop-culture licensed games from Bally you can try if you’re not the biggest admirer of Anchorman.

Alternatively, for a similarly cheeky ‘70s feel, you could try the racy, Playboy Hot Zone.

Movie tie-in license: As a highly-rated comedy movie, even players who have never seen the film will appreciate some of the jokes and visuals the license makes possible.

Loads of bonus features: No fewer than five unique bonus rounds mean it will take a long time to see all the Anchorman slot game has to offer. 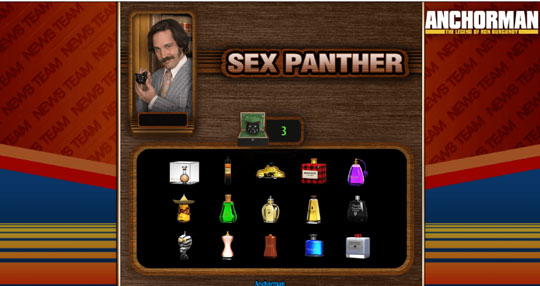 Great visuals and audio: Everything in this game is animated smoothly, down to the small flourishes, such as the little animations that play on winning symbols. The soundtrack is in parts excellent, as are the choice quotes taken from the movie.

No auto spins or line customization: The most dedicated of players, however, may be put off by Anchorman’s lack of these two features. When the rest of the game is so polished, it’s a shame that they left out these options.

Relatively low maximum bet: This shouldn’t be too much of a problem as $150 is still a substantial bet. However, for the highest-rolling, big-budget players, it might not be enough.