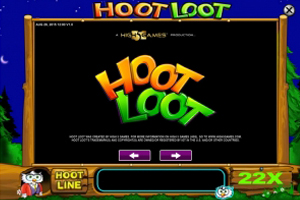 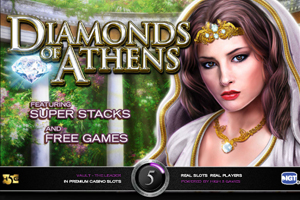 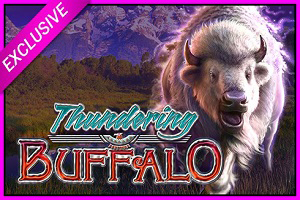 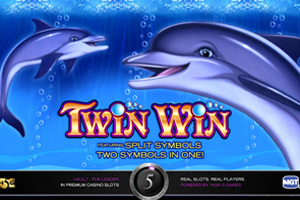 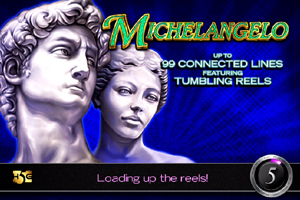 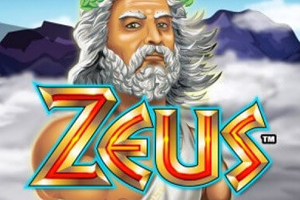 Free Zeus
Alice & The Mad Tea Party is a fantasy-themed slot based on the popular novel Alice’s Adventures in Wonderland. The three-by-five-reel, 30-payline game is a complete replica of the endlessly magical adventure portrayed in the book and films.

The slot is by WMS, a renowned, Chicago-based manufacturer of video lottery terminals, slot machines, and casino gaming software.

Alice & The Mad Tea Party is true to the original story. The in-game play, featuring brilliant graphics and animations, will revive your childhood memories of the classic from 1865.

Through the reels, the slot tells the story of Alice, who fell into a rabbit hole and entered a fantasy world with imaginary creatures.

The game focuses on the mad tea party, which takes place in chapter seven of the Wonderland story. The reels depict this event perfectly by featuring teapots, “Eat Me” cakes, and “Drink Me” potions.

The game offers an array of bonuses to keep you engaged and happy. They include free spins and a unique feature dubbed “the Alice feature” capable of turning all five reels wild. Alice & The Mad Tea Party doesn’t have a progressive jackpot. However, the game has a decent jackpot payout of 5,000 coins if you manage to get five Alice symbols to fall on a single line.

The game has several bonus features, including:

You must land scatters on reels one, three, and five to get six free spins. The game also has a re-spin feature. Before every spin, you can select from the teapots above the reels. Selections reveal additional multipliers, wilds, or activate the “Super Mad” re-spinning feature.

Alice & The Mad Tea Party has two notable wilds, Alice and the Cheshire Cat. The Alice feature is activated randomly in the base game. It can turn one to five reels wild. The Cheshire Cat feature can transform one to ten spaces wild.

The game also includes multipliers, the most notable being the Queen of Hearts feature. To activate this feature, four playing card soldiers must land on the reel set. You need to choose any one of them to turn all positions wild. This random feature is capable of increasing your stake by 50 to 250 times.

The Caterpillar feature is another notable multiplier. This feature multiplies your winnings by two to 15 times. The Mad Hatter feature appears from different teacups and reveals various multipliers.

Alice & The Mad Tea Party includes some notable features, like a quick bet panel that allows you to bet and play in seconds. The game also offers an advanced autoplay function that lets you set the automatic gameplay to stop when a certain number of games or minutes passes.

The autoplay function can also be controlled based on stakes or outcome (i.e., when you enjoy a big win). The game also has a classic panel feature that allows you to select lines, feature bets, and bets per line quickly and easily. Alice & The Mad Tea Party is for fans of slots and of Alice in Wonderland. We recommend this game if you enjoy fantasy-themed adventure stories based on actual movies or books. If you love cartoon-themed slots, you’ll also find this game enjoyable.

This game suits low-limit players as bets can’t exceed 100 coins for all lines. The minimum wager of $0.05 and maximum wager of $30 are ideal for low- to medium-stakes players. Nevertheless, the maximum payout of $1,500,725 can attract those who love big prize wins.

Great replica: WMS did a great job replicating Alice in Wonderland. The most notable features of the original story and its characters are present. The gaming experience matches that of being in the actual adventure. If you love Alice in Wonderland or fantasy-themed slots, you’ll like what WMS has done with this game.

Great bonuses: The game also includes an array of bonuses capable of turning five reels completely wild. Special spin features like the “Super Mad” re-spinning feature, and wilds like Alice and the Cheshire Cat have the potential to increase your winnings exponentially. Alice & The Mad Tea Party also has multipliers that can increase your stake two to 250 times, making these bonus features one-of-a-kind.

Fixed RTP: The game has a fixed RTP of 96%, which is commendable since all players have the same odds regardless of their stakes.

Highly replayable: WMS went a step further to ensure the game is replayable. Besides adding an auto spin function, they allow you to customize this function further (i.e., set the game to stop automatically after a certain number of minutes, games, or wins). WMS also included a quick bet panel that allows you to place bets and start spinning in seconds. There is also a classic panel feature for selecting lines, feature bets, and bets per line in record time. These features remove the boredom experienced in many slots. Low RTP: The game may have a fixed RTP that is good for player odds; however, it is considerably low if you are keen on enjoying substantial wins. The game offers frequent but tiny gains that don’t translate to much with small bets.

Updates: Although the game is playable online on all computing devices, you may be required to install some plug-in updates to enjoy uninterrupted gameplay. This may be an inconvenience if you are looking for a slot you can play instantly.

Limited theme appeal: Fantasy-themed slots don’t have a universal appeal. If you can’t stand magical adventure stories, you won’t like this game.

Few free spins: The standard free spins feature offers up to six free spins. Although there is a re-spinning feature, the odds of landing it aren’t high. Free spins are a crucial feature for slots with a low RTP because they balance out losses.