Some of Konami Games’ video slots have been in circulation for more than a decade. African Diamond is one of those, and some online versions of it are undergoing upgrades. The live version appears in several forms, as does the internet casino game, but the latter is getting a software boost.

The original African Diamond doesn’t offer any outstanding unique features, though there are incentives to play, such as free spins and 2x multipliers during all free spins. The graphics are engaging, especially the elements that seem to come to life when they appear on paylines.

The game is a common slot, but it’s not as well-liked as its offshoots that offer more glittering jewels and extra multipliers. As a brand, African Diamond is strong, but its latest iterations are stronger than the original.

African Diamond offers a raw glimpse of Africa. The outline of the continent is the scatter symbol, one that offers payouts when at least two appear anywhere on the screen but also triggers the bonus round.

Diamonds are the gem for which Africa is known, and they are the wilds in this game, appearing on the second, third, fourth, and fifth reels to substitute for any of the other symbols except the continent itself.

But it is the gorilla’s face that is the most valuable, followed by the profile of the man wearing tribal gear. Pelicans and butterflies are the other symbols that appear alongside the traditional 9 and 10, Jack, Queen, King, and Ace.

The images are powerful, with gorillas expanding on the screen when they complete a payline. However, the visuals are fairly stereotypical of a continent that is too vast and diverse to be characterized by wild animals. The graphics may be detailed and full of dark but brilliant colors, but the overall feel of the game has an unnecessarily sinister tone.

As a 3×5 reel game, African Diamond is fairly basic. There are 30 paylines, but the minimum bet is two bets per line, making the lowest possible wager $0.60. As with most Konami games, paylines begin with the left-most reel and pay as symbols accumulate on the reels toward the right. The highest win on each line pays.

The best payline to hit for a significant payout is five gorillas, which garner 1,000 credits. At $60 per spin, a player can win $60,000. The tribal warrior pays 500 credits for the symbol across five reels, as does the continent scatter symbol. The pelicans and butterflies pay 250 for five but appear much more frequently than the warrior or continent.

There is no jackpot in this title, and with the maximum bet at $60, there is no chance for a jackpot-style prize. However, players can earn significant payouts.

There is no unique feature in African Diamond that would set the game apart from other culturally-themed video slots. Its shining feature is part of the free spins as all wins during that bonus round are doubled. 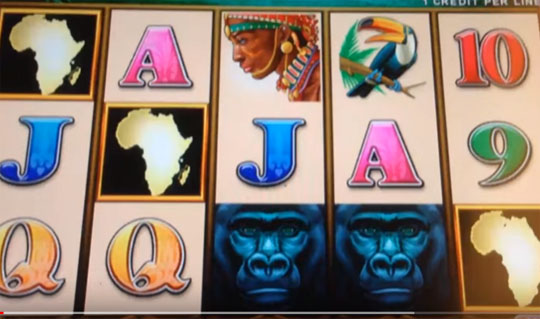 The shining, spinning diamond is the wild in the game, and it can appear on the second, third, fourth, or fifth reels. It can substitute for any of the primary symbols, numbers, or letters, except for the African continent symbol.

The symbol of the African continent outline serves as the scatter, which pays one credit when at least two appear anywhere on the screen. Five of the scatters pay 500 credits.

When the scatter symbol appears on three reels, it triggers ten free spins as the player’s bonus round. Four reels garner 15 free games for the player, while that symbol on five reels pushes it up to 25 free games.

All wins are doubled during free spins. It is also possible to trigger more free games during the bonus spins, all of which add to the number of remaining spins.

Players looking for a familiar name and brand steer toward African Diamond as the game has been present in online and live casinos for years. If they know it is a Konami Games title, they know the solid reputation that comes with that.

The lowest-limit players may not want to play African Diamond because of the $0.60 minimum bet, and high rollers will stay away as well because of the maximum bet set at only $60.00. That still leaves plenty of room for the majority of players, however.

People with a fondness for or connection to Africa may initially be attracted to the game, but they also may take offense as the symbols are basic and stereotypical. 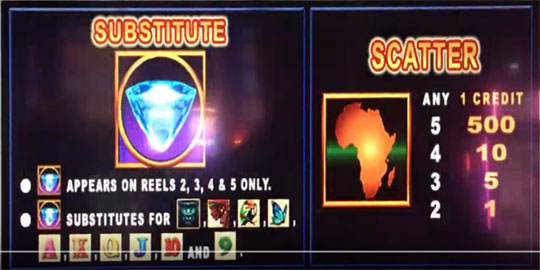 Konami Games links African Diamond to Norse Warrior for similar gameplay and the use of the same gaming platforms. The African Diamond game also has three offshoots, one with Glittering Jewels, another boasting of Double Deluxe, and one with a Jewels of the Wild suffix.

Bonus round multiplier: Because many slot games pay standard wins during a bonus round, African Diamond stands out in that it doubles all wins achieved during free spins. That 2x multiplier increases the winning – and the excitement.

Clear presentation: The graphics may be set in a dark background, but they are clear and bold, and they keep with the overall theme. The rules are also very easy to understand.

Name recognition: Having been in circulation for more than a decade, slot players easily recognize the African Diamond brand. It is so popular that developers have built on the original to offer three additional offshoots of the game, giving it even more publicity. 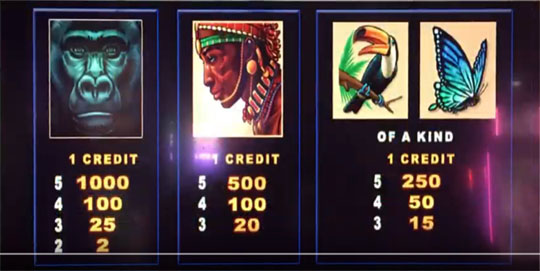 Limited betting: With the minimum bet at $0.60 instead of $0.30 and a maximum bet of $60.00, there are not nearly enough betting line options. The omission of a single bet per line may confuse some people, and lowest- and highest-betting players should steer clear of African Diamond.

No jackpot: The lack of a progressive or jackpot will turn some players off.

Cultural insensitivity: Players who know anything about the diversity and broad reach of African culture may take offense at the stereotypical portrayal of an entire continent with gorillas, tribal men, and diamonds. The use of the outline of Africa as one of the primary symbols also indicates little knowledge of the continent and any specific aspects of it.