Although not one of Aristocrat’s most popular games, the Australian developer’s 50 Lions slot can still be found on casino floors worldwide. The online version of 50 Lions is an exact replica of the original, which is good news if you are a fan of the land-based casino game.

For uninitiated players, though, the game looks, sounds, and feels very dated – beyond the point of retro. The colors look more washed out and dull than in the casino version of the game, and the sparse features can’t compete with more current online slots.

It may be a long shot, but it is possible to hit 50 lines of lion symbols, the highest paying symbols in the game. Lion symbols are the king of the reels and the only stacked symbol on the regular reels. Stacked lions make it possible to score multiple winning lion combinations on the same spin when they land on adjacent reels.

The 50 paylines are spread across five reels and four rows (5×4 configuration) depicting the African savannah. The lion symbol pays 1,000 coins for a five-of-a-kind combination on a one-credit bet in free play mode.

Zebras and giraffes pay 500 coins for five-of-a-kind combinations, with savannah trees and tribesmen symbols following close behind. Kings and queens pay the highest of the playing card symbols, with nines and tens as the lowest valued symbols on the reels.

Unfortunately, there are no wild multipliers or payouts for matching wild symbol combinations, unlike some other Aristocrat slots. Protea flower symbols are scatter symbols that trigger the free games feature, which awards free spins with extra wilds on the reels.

The game’s background scene depicts the African savannah landscape and wild animals against a fiery sunset. The background and the reel structure remain static throughout the game, including the free spins games.

The sound effects are the same as the casino game, with standard, retro Aristocrat casino slots sound effects. The lion symbols roar when they’re part of a winning combination, and an African drumming soundtrack plays in the background during the free spins. 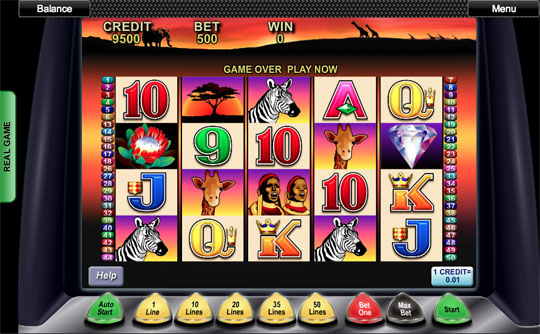 Choose to play one, ten, 20, 35, or 50 paylines by selecting the associated buttons. You can also choose from six different bet levels in free play mode by playing one, two, three, four, five, or ten credits per line. Click the “Bet One” button to choose how many credits you want to play or click the “Max Bet” button to go all out.

The paytable is static and only shows payout values for one-credit bets. You can multiply the values on the paytable by the number of credits you are playing per line. For example, the lion symbol pays 200 credits for a four-of-a-kind combination, which becomes 2,000 coins if you are playing ten credits per line.

The autostart button automatically starts the reels, which won’t stop until you click the auto start button again. It is not possible to set a specific number of autoplay spins, so it’s important to pay attention to your balance. The auto-spins also run fast, making it hard to see the totals on the win counter before the next spin starts.

The return-to-player (RTP) percentage for this game is 94.71%, which is just below average for an Aristocrat game.

There are no jackpots available in this game, which can be unfortunate if you are a jackpot fan or are looking for really big wins.

Special features and bonus games are minimal in 50 Lions; however, a free spins bonus game awards free spins and extra wilds on the reels. 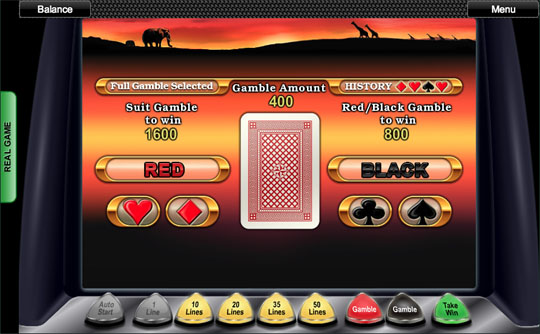 Lion symbols, the highest paying symbol, are stacked symbols. You can land as few as one, or as many as four to cover the entire reel. Wild symbols in the free spins bonus game also become stacked when extra wild symbols are added. Stacked symbols can help create multiple high-value wins on the same spin.

The free games feature awards ten free spins, which are played on the same reels as the base game. On each free spin, one extra wild symbol is added to the reels. You can retrigger the free games once and receive five additional free spins. 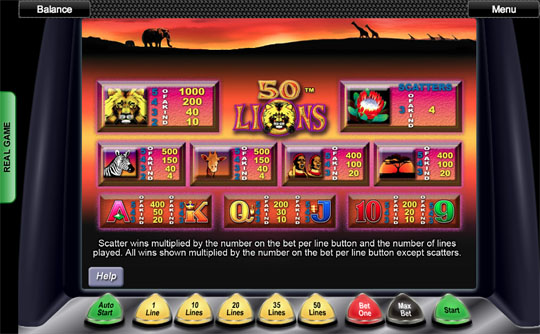 It’s difficult for us to imagine the 50 Lions graphics or gameplay would be appealing to you if you are a seasoned online slots player who typically plays cutting-edge games. However, 50 Lions is a relatively well-known slot machine at land-based casinos, like other popular Aristocrat slots. This online slot would be ideal for fans of the 50 Lions casino game, penny-slots players, and beginner players thanks to the simple and easy gameplay.

Also from Aristocrat, 50 Dragons is almost identical to 50 Lions in terms of the game structure, paytable, and bonus features. The game themes are different, however, as 50 Dragons features a Chinese dragon theme instead of the African savannah theme in 50 Lions.

Aristocrat’s Buffalo slot is more similar to the 50 Lions theme, with a focus on the American Great Plains.

The reels in Buffalo are filled with wild game animals, and stacked buffalo symbols are the most valuable symbol on the reels, much like the stacked lion symbols in 50 Lions. The similarities end there, however, as Buffalo uses Aristocrat’s “Xtra Reel Power” ways to win instead of individual paylines, and the bonus features are different.

Free spins bonus game: The game’s main bonus feature awards free spins with extra wild symbols on the reels.
Stacked symbols: Stacked lion symbols and stacked wilds in the free spins game can help you score big wins.
Fifty paylines: You can play up to 50 lines and six different bet levels.
Low stakes: This game is perfect for penny-slots players.
Easy to play: Virtually anyone can play this game.

No multipliers: Aristocrat games often offer multipliers, but they’re conspicuously missing from this game, which detracts from the already small feature selection.
Dated graphics and animations: The graphics are exceptionally dated and washed out, and the simplistic animations detract from the gameplay experience.
Jackpots: There are no jackpot options, which is disappointing if you are looking for jackpot-sized hits.
Limited bonus features: Very few bonus features are offered compared to newer online slots.
Auto spins: The auto-spins don’t stop automatically, and they run too fast.
Scatter symbols limits: Scatter symbols must be on adjacent rows to trigger the bonus feature, so they are not true scatter symbols, making it potentially harder to trigger the bonus.