Australian game developer Aristocrat has released an online version of 50 Dragons that is an exact replica of the original, land-based casino slot of the same name.

This Chinese dragon-themed slot is less dated than some of the other titles in the Aristocrat catalog, and it offers several features that increase your chances of big wins. Fans of playing 50 Dragons at land-based casinos are sure to appreciate this authentic conversion of the original game.

Aristocrat perfectly replicated the 50 Dragons land-based casino game in this online version, emulating the same design, sounds, and features as the original. They did not add any upgrades or modifications for online players.

A deep-red Chinese landscape provides the backdrop for the red reels, which are adorned with the same symbols found in the casino slot. The game console stays the same throughout the game, and free spins bonus rounds are played on the same reels.

The authentic sound effects are retro casino slot sounds punctuated by dragons growling when a golden dragon combo hits. Background music is conspicuously absent from this game, even during the free spins bonus rounds. 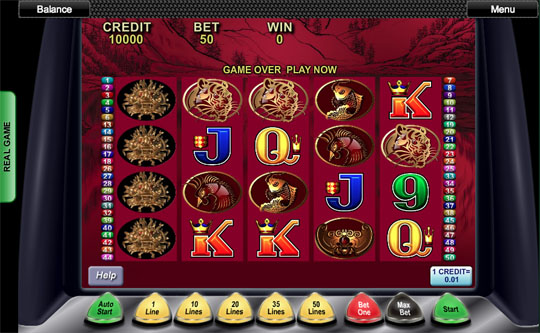 The in-game paytable does not automatically update to reflect your current stake. Instead, the payout values in the static paytable are for one-credit line bets only. If you want to calculate the payout for a winning combination at a higher bet level, multiply the paytable value by the number of credits per line you are playing.

The autostart button triggers the reels to spin automatically, and they don’t stop spinning until you click the autostart button again. It’s easy to let the reels spin longer with this function than you might otherwise. The auto-spins also transition between spins faster than we would like, making it hard to see the payouts.

The return-to-player (RTP) percentage is 94.71%, which is slightly below average compared to other Aristocrat games.

The original, land-based 50 Dragons does not offer any jackpot options. Unfortunately, Aristocrat did not add jackpot options for online players, either. 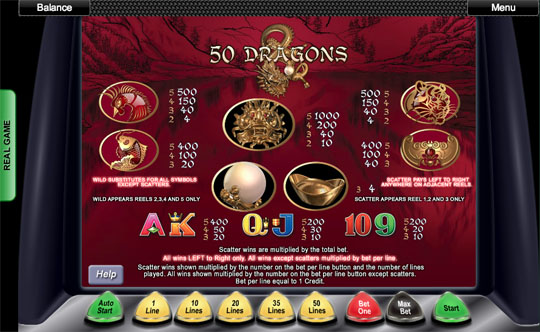 Confined primarily to a free spins bonus game, the bonus features in 50 Dragons are limited compared to those of newer, more feature-rich online slots.

Dragon symbols are stacked symbols, and you can land as few as one on a reel, or as many as four to cover the entire reel. Stacked dragon symbols are on all five reels, so they can land on adjacent reels to create multiple winning dragon combinations. 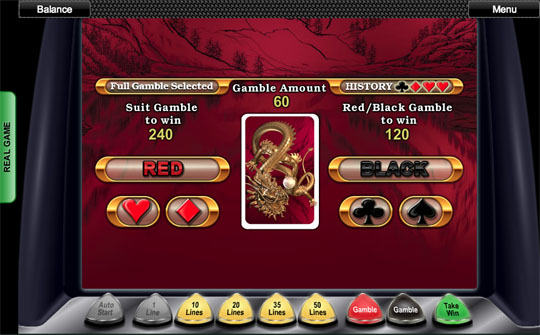 You can choose to collect or gamble any win. Guess the color of a face-down playing card correctly to double your win, or guess the card suit correctly to quadruple your win. Collect your total win any time or keep gambling up to five rounds. If you lose, you lose the entire win amount you gambled, and the gamble feature ends.

This game is ideal for fans of the land-based 50 Dragons casino slot, Asian-inspired slots, and dragon themes. The online version of the game has been perfectly converted from the original game, complete with penny bets, making it perfect for low-budget and penny-slots players.

The game is also easy to play and does not include any complicated bonus features, making it a good choice for beginner players.

Choy Sun Doa and 50 Dragons are both from Aristocrat and boast similar Chinese themes and symbols, including golden dragons as the highest paying symbols on the reels.

Alternatively, Aristocrat’s 50 Lions game structure, paytable, and bonus features are essentially the same as those in 50 Dragons.

The games are virtually identical, except for the theme, symbols, and design details. An African savannah theme is featured in 50 Lions, with stacked lion symbols as the most valuable symbol on the reels (compared to the stacked golden dragon symbols in 50 Dragons). The visuals in 50 Dragons also look sharper and more current than the dated aesthetic of 50 Lions. 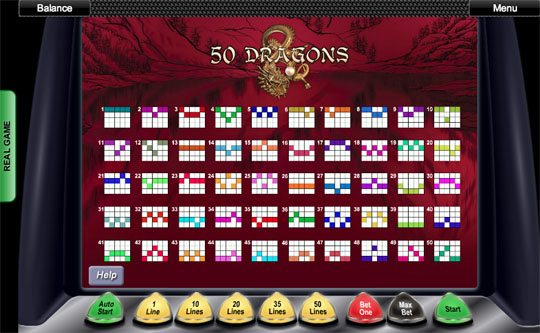 Bet options: You can choose to play up to 50 lines and six different bet levels.
Authentic casino slot: This online version of 50 Dragons is the same as the original, land-based slot, making it a perfect choice for fans of the casino game.
Penny bets: It is perfect for low-budget, penny-slots players.
Simple to play: The simple game options and features are perfect for beginners.

No multipliers: Multipliers are relatively common in other Aristocrat slots; however, there are no multipliers in this game, which detracts from the already limited feature selection.
No jackpots: There are no options if you are looking for jackpot-sized hits.
Limited bonus features: There are very few bonus features compared to newer online slots.
Scatter symbols: Scatter symbols can’t truly be scattered in this game because they must be on adjacent rows to trigger the bonus feature.